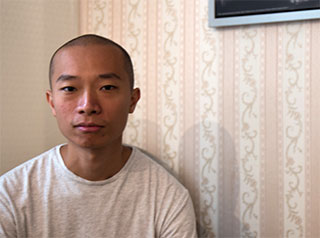 Obsessed with languages and the aesthetics of East Germany, I have been learning a bunch of German dialects and random languages and have built up my own collection of German books published from the 19th century to the present day. As a translator and visual anthropologist, I reflect every day on life with writings, together with my daily instagramming: I am also a freelance critic who mainly focuses on how understanding language can change one’s world vision and how to tell a visual story.

I know many parts of the city – this is thanks to my random enrollments in different language courses at the Volkshochschulen across East and West Berlin. I have been living in Prenzlauer Berg since 2017 and will soon move to Kreuzberg. As a born-and-raised Macanese, I have also lived in China, Portugal, Belgium and Singapore. I speak reasonably well Cantonese, Mandarin, English, French, Portuguese and German.

It would not seem to be too exaggerated if I said Berlin is a continent apart – the German capital city is not really only German, nor even plainly European. As a symbol of freedom after the Berlin Wall’s – and subsequently, the East German regime’s too – fall in the end of the 1980s, the city has become a completely separate “republic”: the German bureaucracy is still impressively complex that it is a headache even for the Germans themselves, the North-German cold faces still cover their warm hearts, the Berliners from Berlin still talk German with a strong accent, but along with a bunch of international languages spoken by a very diverse group of different cultures – a daily musical to celebrate the cultural diversity of the city. Berlin is clubbing, Berlin is reading, Berlin is – all too simply – living life and history: a huge well-composed cultural traffic jam is Berlin’s proud-to-be character, which marks it different from other major European capitals. It is just hard to tell why I love Berlin in a few short lines.

All articles by Cheong Kin Man

Troika – Only on Spotted by Locals

a Livraria – Italian and Portuguese books

Moby Dick – To make a street complete with books

Prior & Mumpitz – Bookstore surrounded by 5 cafés

Antiquariat Wegner – A must sight to see

Tucholsky-Buchhandlung – In the name of the writer

Berliner Büchertisch – For children and adults

Antiquariat Wiederhold – A must-visit for experts

U2 Northwest – “Skyline” from the past

ocelot – “…not just another bookstore”

Handbestand – A Sunday bookstore and café

Die Geisterschmiede – The fall of Philosophy!

Kramkiste – The nostalgia of the East

Fetting u. Minx – “The Reign of Books”