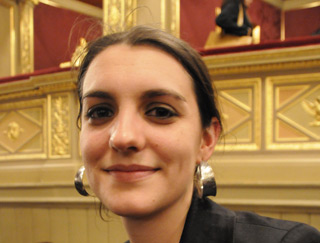 About me
I’m a freelance photojournalist, documentary filmmaker and translator. I grew up French (in the Paris area) but ever since my 19th birthday I’ve never stopped travelling. I write guidebooks and reports for various web and paper magazines. I love playing on various media (film, photo, sound, writing) to achieve my goal: telling people about “the unknown and the little known”.

I have lived and worked in several countries in the past few years including Poland, Thailand, Hungary and the USA. I learned to speak the local language each time, I am now jumping on any occasion to keep that up!

After I graduated from an International Relations master in Paris, I got hired by a French Publisher in 2008 to update their Hungary and Budapest guidebooks. In my mind I’ve overstayed ever since ;-) and signed up at the university to learn Hungarian. Budapest really has some magic appeal I couldn’t resist.

I wanted to live there, and I finally came to settle down in Budapest in 2010, ended up adopting a real Magyar lifestyle (from palinka one-shot drinking to “kurva”-swearing) that I would trade for no other! Budapest is where I always come back even when I’m far away.

I’m a language and travel freak basically! To me travelling means unexpected encounters. I wander around, get lost, chat with absolute strangers: my camera is never too far to capture the essence of the places I get to experience.

I’m working on several projects right now, one of them is a transmedia documentary on Detroit (USA), a city highly emblematic of the American industrial revolution -now a shrinking metropolis- reinventing its future through urban farming.

Why Budapest?
Budapest is simply a very attractive city. And it’s full of little secrets and anecdotes! It’s hard not to like these architectural masterpieces from Budapest’s booming period – the end of the 19th to the beginning of the 20th century, when art-nouveau was hip! And there is the mighty Danube, I love to cross it on Erzsebet bridge!

Budapest had a glorious past, its present is a bit tougher but that’s what I like in the Hungarian capital. It’s beautiful, but still it breathes and lives, it’s NOT a museum, it’s a bit run-down and not everything works the way you’d like it to be! I enjoy Budapest arty and “Bohemian” sides as well.

I love its glorious cafés and gastronomy, its “ruin-pubs” and smoky “kocsma”, its hectic, colourful and friendly nightlife. This place is full of creative and extraordinary people!

Where else can you find me online?
> My professional blog, full of Budapest articles, photographs and useful links.
> Urban tracks, swinging through underground Europe,
> My Detroit documentary project, on Motor city’s urban renewal.
> Spotted by Locals Interview

All articles by Hélène Bienvenu

48 Hours in Budapest: A Local’s Guide