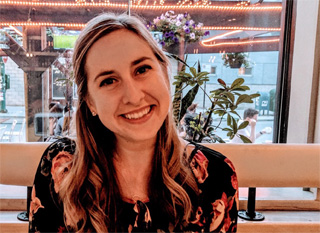 About me
I’m Lissa – short for Elizabeth. Pronounced like Melissa without the “me”. I’m a native Clevelander, but a job in healthcare public relations brought me to Chicago four years ago. You can typically find me training for a marathon, binge-watching HGTV, taking improv classes, or dreaming of one day owning a pug.

Never one to sit still, exploring is one of my favorite things to do – whether it’s my own city or other places across the world. I’ve lived in Bangkok, Vienna, and Frankfurt and have visited over 50 countries. Through my travels, I’ve met the most fascinating people and took part in lots of adventures such as scuba diving in Bali, dog sledding in Lithuania, and climbing the Great Wall of China with a broken foot.

When I travel, I love hearing from locals about the best spots to grab a drink, try local food, or listen to live music. I can’t wait to give back and share my favorite things to do in Chicago with you!

Chicago has something for everyone as it’s broken up into distinct neighborhoods with their own identity. The trick is getting out of the downtown area called “the Loop” and exploring the surrounding area.

Aside from the countless food and drink spots, Chicago has one of the best entertainment scenes as it’s known as a home for comedy, jazz and blues, and even magic. It’s likely you’re seeing the next big star when you go to a show in the city.

Chicago is built along Lake Michigan, but the city doesn’t allow for construction along the lakefront. This means that there are miles of parks, beaches, and a pathway within the city limits. There’s nothing like running or biking along the lake or just relaxing in the with friends at the beach.

Chicago is so much more than the bean. If you know where to look, the city can be an experience unlike anywhere else.

All articles by Lissa Pavluk

Guthrie’s Tavern – Board games in Wrigley

Southport Grocery – For the brunch lover

By Lissa Pavluk
Last Changed Date: 2016-05-19 11:45:13 +0200 (Thu, 19 May 2016)
We use cookies to analyze traffic, provide personalized ads and social media features. We share (anonymous!) data with our partners.OkNoDetails
You can revoke your consent any time using the Revoke consent button.Revoke