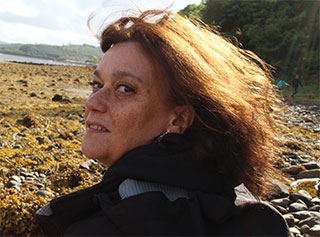 About me
Originally from France, I left Paris to move to Glasgow in 2015 and fell in love with the country. I teach French to foreigners and have a passion for languages, film, and photography. I am currently studying for a Master’s in film curation, have organized a few film events and contribute to a Scottish art magazine.

I am drawn to the outdoors, love Scotland’s wilderness and forces of nature. I fancy hillwalking and road trips to Northern territories and feel great on top of a mountain. My goal is to take as many ferries as I can to reach each of the many Scottish islands, but it takes time. I enjoy traveling off the beaten track, and mainly anything connected with visual and living arts.

I still don’t understand every Scot I come across, but I am not desperate yet!

Why Glasgow
• Glasgow is a city to experience. It is all about the people, their energy and creativity to contribute to its achievements. Any season. Any weather.
• Because it is an inclusive, multicultural city where you hear many accents and eat food from around the world.
• For its Victorian architecture, historical industrial past and contrasts.
• There is always a festival on here, including film, music or theatre
• For its hidden territories, lanes, new doors to push and many pop-up cultural events.
• For its churches converted into bars.
• For its excellent haddock fish & chips but also vegan food.
• Because of its high sensitivity to social, political and cultural questions and the tendency to refuse anything pretentious.
• Because it is constantly adapting and reinventing itself.
• Because it is one of the greenest cities in the UK with many beautiful parks.
• It is also an easy getaway to the Western Highlands and great outdoors.

Where else can you find me online?”

All articles by Helene Audureau

The Lighthouse – My top city view

The Pasionaria – A symbol against fascism

The Bon Accord – A malt whisky & ale haven

The Southern Necropolis – A piece of history