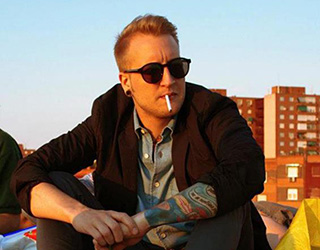 About me
I was born and raised in Stockholm, Sweden up until 2007 when I moved to Madrid for a job opportunity within the videogame industry.

I’ve always hated school ever since I was a little kid, never quite took a shine to the conventional school system and after high school that led to me exploring other options instead.

I started as an apprentice in a tattoo and piercing shop in the center of Stockholm and this is kind of where my appreciation for art, music, movies and culture began flourishing.

Also, I must say I hate long rants or talking about myself so I’m gonna wrap this up real fast. So here it goes.

I think that about covers it for now.

ps. Oh and I’m also a big believer in the comedy of Will Ferrell

Why Madrid?
As mentioned above, the tattoo and piercing industry kind of opened up my eyes to a different part of culture and living which led me to feel I had more to explore.

I came to Madrid in 2007, the time span from the moment that opportunity arose to me landing in Barajas Airport was about 2 weeks.

I had a contract for 3 months after which I was supposed to move back to Stockholm. But this city just sunk its claws into me with its incredible weather conditions (compared to Sweden) the diversity in every aspect of society and the all around relaxed attitude of the people living here.

Madrid has something for everyone and months turned into years and I began to form a life down here and I have no intention of going back as for now.

All articles by Johan Nordin

Teleferico Terrace – The other side of Madrid

Gumbo – With a Southern twang

By Johan Nordin
Last Changed Date: 2016-05-19 11:45:13 +0200 (Thu, 19 May 2016)
We use cookies to analyze traffic, provide personalized ads and social media features. We share (anonymous!) data with our partners.OkNoDetails
You can revoke your consent any time using the Revoke consent button.Revoke