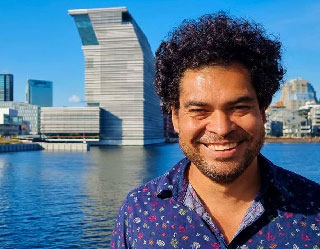 About me
I’m originally from Rio de Janeiro, Brazil and I have been visiting Oslo since 2012 and moved to the city in 2019. I could describe myself as a traveler at heart. I love to explore different places, interact with various people and learn about the local culture, history and languages. Very interested in live music, especially from Latin America and Africa, and dancing.

I find myself comfortable in both urban and natural environments, which is perfect when living in Oslo. Professionally, I’m a TV production fixer and run the company Fixer in Oslo. I am also an Experience Travel Entrepreneur and I am now busy with setting up the boutique tour operator Nordisk Experiences.

Why Oslo
Oslo is a city that keeps its special secrets well hidden. At first sight, one might think it’s not an interesting city at all, but in fact, after discovering its historical districts of Rodeløkka, Kampen and Vålerenga, the ultra-modern areas of Bjørvika and Sørenga, its immense, nearly intact nature of the Oslomarka, the bohemian areas of Grünneløkka and Sagene, the beaches and parks in the summer and the many kilometers long cross-country skiløyper, it’s impossible not to fall in love with the city.

Oslo is a completely different city in each season, which is particularly special for me, coming originally from a tropical country like Brazil.

All articles by Rodrigo Braz Vieira

Happy Foods – The café of Vestkanttorvet

Stovnertårnet – The longest tower in Norway