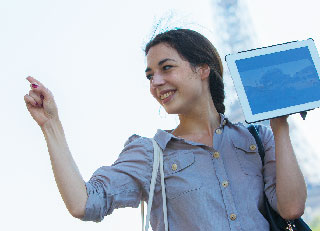 About me
Born and raised in Paris, I studied History of Cinema before becoming a tour guide in 2011. Since then, I’ve been offering to rediscover Paris through cinema in several districts of Paris and around.
Paris is the most filmed city in the world and cinema has had a thousand ways of representing it through its characters and its stories, authentic or imagined. I like to allow people who know their city to see it differently, as I like to show Paris’ treasures to tourists.

Why Paris
Paris is my city of heart and it’s a city I’ve been walking around since I was a little girl. I’ve lived in many arrondissements, discovered it through the eyes of my grandparents and parents, and for several years now, I’ve been trying to do the same with people I know and those I don’t. I find beauty and interest everywhere, whether I’m walking in the most iconic neighborhoods or in the least frequented streets. It’s a city that’s alive, warm and so diverse it makes you feel like you’re traveling through time and cultures in a small area.

All articles by Juliette Dubois

Les Deux Colombes – A legend and a restaurant

Chez Deyrolle – You will love taxidermy!

Le banc d’Agnès Varda – A break under a tree

Le Max Linder Panorama – The best place for a movie

Le Cinéma du Panthéon – Have a tea and a movie!