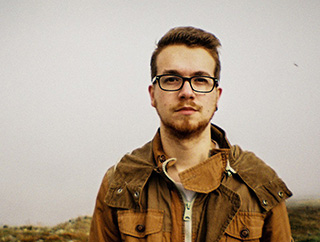 About me
I was born in Liberec in the north of the Czech Republic, and lived there until the age of ten when my family and I moved to Canada where I spent most of my formative years. After high-school, I moved to Prague and enrolled in International Area Studies, doing a semester abroad in Amsterdam. After that I relocated to Sweden to do a master’s in Economic Growth, and Innovation at the Lund University. Currently I do PR for the Prague Institute of Planning and Development.

Besides traveling, I am passionate about photography and music, having played in various bands since the age of thirteen.

I live in Vinohrady close to Riegerovy sady, where I also like to hang out when the weather permits. If you see me there, come and say hello!

Why Prague?
Living more than a quarter of my life abroad in big multicultural cities I’ve never felt that Prague was anything special – that is until I moved there for university and realized it was beyond awesome. Not only for its unique atmosphere where the various historical epochs subtly complement each other with the not-so-glorious remnants of the communist era, Prague is quite the place to be.

Working as a tour guide on electric bikes I encountered my fair share of customers who came to Prague to see either the bleak and desolate Eastern Europe with its troubled folk, or some sort of a magic fairy-tale land, teeming with Golems, horses jumping across rivers, and people getting thrown out of windows. Sure, look in the right places and Prague is just that. Look further and Prague is so much more.

Also, I realize that with each passing year I spent here, the things that I used to miss from cities like Amsterdam or Paris – the thrift stores, the little cafés, and restaurants for us herbivores – have been cropping up all over the place, making the city more, for lack of a better word, ”people-friendly”. Prague is becoming a proper European capital.

Where can you find me online?
Tumblr

All articles by Štěpán Bärtl

Shakespeare and Sons – Read a book!

Bastion – View from a fort

La Camille – Best pasta on this side of the river

Řehoř Samsa – Metamorphosis in a passageway

Jiřák – Farmer’s market and much more

Hemingway Bar – A teleport into the past

Roesel – A beer-flavoured jewel in a sea of kitsch

The Tavern – Burger that has strength

Žižkov Tower – Eyesore or an eyecandy?

Below 7 kg – A backpacker’s guide to the galaxy