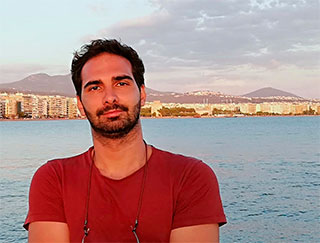 About me
I’m the third generation in Thessaloniki. I have lived most of my life here and from a very young age I loved to read stories about my city and its interesting and multicultural past. Different people and religions have left various architectural elements and urban myths in Thessaloniki, like the Byzantines churches, Turkish baths and markets, the Armenian and the Catholic Church, the Jewish Synagogues and the villas of the bourgeois of the city.

I wanted to learn more about the past and understand how all these communities used to interact and live their lives peacefully. My interest in understanding the city, the culture and its architecture was embodied during my bachelor in Sociology and my masters in Urban Studies. I attended Erasmus in Lyon, France, where I had classes about culture and film studies. I then attended an international master where I studied urbanism and I was involved in urban and cultural projects in four Europeans capitals (Brussels, Vienna, Copenhagen & Madrid). I also participated in youth programs of the European Commission and I traveled to different countries where I worked with NGOs and volunteer organizations, dealing with young people who had fewer opportunities, poverty and marginalization.

I have a lot of friends visiting Thessaloniki now and then, so I’m very used to giving tours around Thessaloniki and making them love it as much as I do. I also wrote two papers about Muslim and Jewish architecture in Thessaloniki and both were presented at International Conferences.

Furthermore I worked for Thessaloniki’s International Film Festival and Open House of Thessaloniki.

Why Thessaloniki?
Thessaloniki is the second largest city in Greece, a cultural center and one of the oldest cities in Europe. I love Thessaloniki for many different reasons. For the history and memories which are denoted in its multicultural past in architecture, food and urban legends.

It is a city that does not grant you its beautiful spots so easily. You must take some time to walk along the coast, go to the public market, get lost in the old Upper Town and have a snack to go. It’s a city big enough for you to feel independent, but small enough to make you feel at home and easily meet your friends for an afternoon coffee.

At the end of the day, it is a city next to the sea and all your problems are solved with a walk by the seaside.

All articles by Angelos Kottas

The Blue Cup – Best coffee place in the city!

Lilipoupoli – What are dreams made of?

The Red House – An urban legend