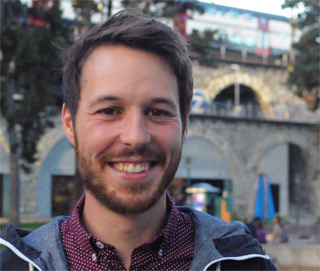 About me
“The traffic light blinked a million times, I blinked twice and twenty years went by” – sing the Lawrence Arms, one of my favourite bands. That’s a little how I feel. It seems like yesterday that I moved from a rural town near Bern to the big city of Zurich (don’t laugh, we’re talking about Switzerland). I moved here in 2005 and the adventure has become my regular life. After a one year break for an extensive journey through Asia and Australia I’m back at Spotted by Locals, and things are a bit different than when I started out: I have a job and can afford to eat out for example.

But many things have remained the same and will – as far as I’m concerned – never change: I still love live music, alternative culture and vegetarian food. I am still a passionate traveller who knows what travellers are looking for in a city. And though I’ve entered my thirties now and have a regular income, I’ll never forget what it’s like to live and travel on a shoestring.

Why Zurich?
Because even after all these years she never ceases to amaze and surprise me – there’s so much to discover in this small city. Just walk into some side street and you can discover a bar run by Cuban immigrants. In the next street it’s heavy metal. And round the corner there’s a jazz bar with a guy looking, talking and acting like James Brown.

And summer is when the true magic happens: Lot’s of open air concerts, open air cinemas, festivals like the Theaterspektakel and the Street Parade, a refreshing jump in the river on your lunch break, evenings with guitars and six packs of beer at the lake. Magic, I tell you.

Where can you find me online?
Watson
Twitter
Couchsurfing
My band: The Moonling

All articles by Roman Rey

Gärtnerei – Your favourite bar – for salad

Café Henrici – Coffee can’t get better than this

Café Zähringer – The executive board serves you

Xenix – For your dose of avant-garde films

Dynamo – The vivid youth centre at the River

Uetliberg by Foot – Nice view after a good walk