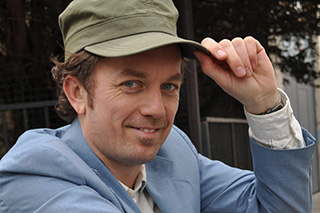 About me
I studied Visual Communications and also Design Writing & Criticism to masters degree level. And my career pathways have spanned the advertising sector and design education. Apart from Paris, it’s London, Birmingham and Brussels that have also been places I’ve called home.

I’m currently working as a transcriber for Arte Reportage, continue to make typographic artwork and produce a bi-weekly radio show on World Radio Paris called #urbanstates which gives portraits of city projects which I think make the city a better place to be.

Why Paris?
Paris is where neighbourhoods are connected by long-stretches of Boulevards. They’re like the arteries of the city. Each neighbourhood is a beating heart, each pumping at its own tempo. Busy, lazy, colourful, classy, loud, calm, gritty, charming.

Paris is more than a romantic postcard city heard about in famous novels, it’s a living metropolis which is great for walking and cycling in to discover the hidden and lesser-trodden nor seen places.

I’m passionate about city living and engage with the city through writing about it. I’m what they call a ‘trailing spouse’. You know, basically going with the flow and going wherever your partner’s job takes them. Thankfully we’re settled in Paris for a long time yet.

Where can you find me online?
World Radio Paris Urban states
Facebook

All articles by Paul Wright

Memorial to Ahmed – An officer remembered

Voies sur Berges – Under the bridges of Paris