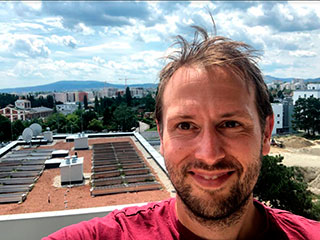 About me
My name is David. I’m a British expat living in Vienna since 2011. I originally only intended to stay in Vienna for a year or two, tops, but frankly, the city has a habit of getting under your skin, so I’ve never felt the need to move on.

I’ve always worked in fields with people and lately I’ve taken up a job as a social worker. It’s a great city to live in when you want to explore human nature.

Other than that, my main hobby is cycling. I’m a bit of a nut when it comes to two wheels. I know every nook and cranny of the city by now, having cycled all over the place. I also love to watch and play football – I once had a season ticket for Austria Vienna.

Why Vienna?
The hype about Vienna is true: the city is one of the most opulent, sensual and high-class places you can live. It’s a paradise of landscapes, surrounded by mountains in the west and south, wine hills in the north, and beautiful countryside and a national park on the banks of the Danube towards the eastern edge of the city.

I’ve been in Vienna for a long time now. I originally came to experience the language and culture. There are few cities worldwide that can boast such a high number of world-class museums, fantastic architecture and a sense of living history. It was the centre of a bustling empire, and traces of that are definitely visible today.

Vienna is a city to fall in love with. It can take time to get used to the people who can be a bit haughty – grantig – at times, but below the surface the city is a gem of a place, a cobble-stoned paradise of theatres, ‘beisln’ (pubs) and little independent restaurants. It shouldn’t be overlooked.

All articles by David Titcumb

Das Jetzt – The time is now

Beim Czaak – Bring me to the Beisl

Sargfabrik – A sense of community

The S45 line – A train through Wagnerian Vienna

Das Möbel – Don’t just eat at the table, buy it!