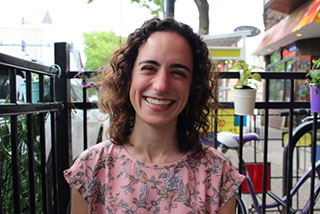 About me
A proud Chicago native and past Fulbright scholar, I hold a BA in English and Spanish from the University of Iowa and an MFA in Creative Nonfiction Writing from Columbia College Chicago. It was during graduate school I really started exploring many of Chicago’s 77 neighborhoods. I occasionally teach English classes but am primarily a copywriter.

I also host an open-mic reading series in Lincoln Park (and on Zoom), write essays, and travel in my free time. I’m on the pursuit for the best cup of brew and have been to over 150 different coffee shops in Chicago.

I’m also an architecture aficionado and lead tours at the Frank Lloyd Wright Home and Studio in Oak Park.

Why Chicago
Chicago has my heart because it’s accessible, a cultural hub, and clean. It bridges the United States’ other cities and it’s a grounded place due to its position in the Midwest. I love Chicago because there’s so much to explore without it feeling overwhelming or too expensive. Each neighborhood is near some form of public transportation and is like opening a new chapter in the same book. Also, I’ve never heard anyone complain about the food or the Chicago architecture!

Where else can you find me online?
www.sophieamado.com

All articles by Sophie Amado

Little Madrid – A bit of Spain in Chicago

Pasta Bowl – Pasta to die for

Long Room – A bar with biscuits

Reggies – Bar with music and shuttles