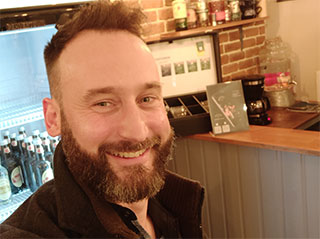 About me
I am a Californian expat living in Europe for the past 8 years. Coming home after having studied abroad in Ireland, I found that I wanted to experience more and resolved to come back. I first got my chance in 2008 with a laboratory job in Switzerland. I lived in a small town called Neuchatel on the French speaking side and soaked up as much language and cheese as possible. In 2012 I transferred for work to Vienna to learn German and try schnitzel. I have been here since.

I am fascinated by language and culture and love seeing it both in obvious ways as well as in the subtle aspects of work and routine living. I love rock-climbing and american football (I played on a Swiss team for 3 years) and am an on/off singer & musician. My high German is now proficient but my Austrian much less so; something still to look forward to.

Why Vienna?
Vienna is rated among the cities with the highest quality of life for good reason. The city is extremely pleasant to live in. Public transportation works nearly perfectly. The apartments are beautiful and mostly affordable. The food and cultural experiences are boundless and always nearby.

Perhaps what I love the most about Vienna is the innovative, but relaxed approach to work. I have never heard anyone speak about the “rat race” in Vienna, as there is a laid back feel to most jobs. This is very healthy compared to the high stress atmosphere of most major cities. This does not, however, take away from Vienna’s ability remain competitive and relevant globally. I think the Austrians are really onto something in the modern way we live and work.

All articles by Christopher Taylor

Skopik & Lohn – Chic and artsy in the 2nd district

Pizza Quartier – Pizza on the Karmalitermarkt

Sobieskiplatz – Hidden gem in the 9th

Said the Butcher to the Cow – Meat crib on the Ring

57 – Cocktails at the top of Vienna

Mayer am Nussberg – Enjoy the end of summer…