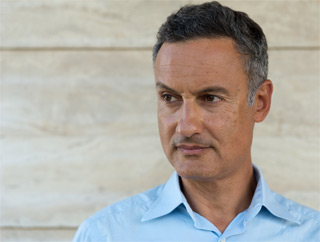 About me
I was born and raised in Athens, Greece. A turning point in my life was adulthood. I emigrated at the age of 19 after never having crossed the Greek border till that age. I have spent my adult life in Boston, Geneva and Zurich.

Born and raised in a metropolis and having spent all summers near the sea, I can only imagine myself living in a big city with a nice waterfront.

At around the age of 10 I got my first camera and also an electronics kit for children with which I built my first small radio transmitters and receivers. My love for gadgets and audiovisual was born: I was taking photos on every occasion in order to document places, faces and events. And with my small FM-transmitter I was broadcasting to the neighborhood imagining that an audience would listen to what I had to say.

In the mid-90s I tried “broadcasting” from a then totally new channel; I constructed some WebPages for the Greek island of Corfu which were hosted at my workstation at CERN in Geneva.

At the age of 19 I went to the US to study Physics at MIT and I got my PhD in 1993. I carried out all research at CERN in Geneva. I stayed in Geneva all through the 90s, commuting a lot to Helsinki, another fantastic city of the continent. Then, in 2000, I moved to Zurich and my life as a physicist was over. Since then I mine large databases with algorithms like regression, neural networks and the like. I also teach this stuff.

Why Zurich?
Every year rankings of quality of life for big cities are published by different consulting companies. For as far back as I can remember Zurich holds the first place, a fact mostly attributed to boring stuff like clean streets, top healthcare etc.

But I personally appreciate other factors. Zurich is simply a very beautiful city with a very beautiful waterfront, numerous nice spots as well as endless cultural and entertainment possibilities. Life is not hectic. Owning a car is superfluous. All lifestyles, from the most conservative to the most extravagant coexist in harmony.

The population is an equal mixture of native locals, Swiss citizens from the rest of the country and foreigners. All in all: in Zurich I can live like I learnt during my school years in Athens or during studies at MIT: as a geek and as a party animal at the same time.

Where can you find me online?
www.facebook.com
www.linkedin.com
www.xing.com
www.internations.org

All articles by Miltiadis Sarakinos

Pumpstation – Restaurant by the lake

Terrasse Café – All from one hand

Utoquai Promenade – We, the people…

Sauna Utoquai – An oasis in the city

Sauna Enge – In love with Zürisee

Palavrion Grill – Where is the beef?