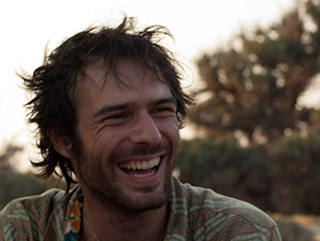 About Me
Hi! I’m Dimitris Hall. I’ve been an Athens Spotter since 2013 and have worked with Spotted by Locals as the site’s editor, social media and content manager since early 2017.

I was born a few months before the fall of the Berlin Wall and grew up in Nea Smyrni (New Izmir), a suburb of Athens that a century ago didn’t even exist as a concept. I’m a μισός-μισός, a “half-and-half”, my constituent parts being Greek and Australian, which honestly doesn’t sound quite right, since the last time I was in Australia was more than 15 years ago, and that just for holidays. I would take away a bit of Australian from my mix and add a bit of German, Austrian, Danish, Bulgarian, Dutch, Uruguayan and Turkish back in — just tiny pinches, for the flavour.

You see, I feel most comfortable straddling ‘the fence’, as sung about by Tim Minchin, where I can see both sides of what is separated. I have always been attracted by ambivalence and the cracks in theories, categories and dogmas, cause “that’s how the light gets in”. My default state is transition; my biggest drive curiosity; my natural habitat the subspace between well-defined boxes.

My favorite color is that of the sky between the golden and blue hours, that brilliant gradient of lilac, orange and red. That is also my favourite time of day. I like how it reminds me that the world keeps turning and will continue doing so for an unfathomably long time, no matter what. Unless a Death Star or a Vogon Constructor Fleet come along.

I enjoy writing (can you tell?) and have a soft spot for nature and animal rights, witty humour and puns, personality typology (INFP 4w5 represent) and languages.

Why Athens?
Athens is the 9th largest city in the EU. It’s a world where different traditions, cultures, entire worlds are colliding and mixing. The dramatic backdrop is everything Western thought was supposedly founded on, which in every aspect is in various degrees of ruination and decay.

This city is a giant paradox, a fascinating riddle. It’s really old (in human terms), yet most of it is really ‘modern’ (as in: dirty, ugly, attempting to be utilitarian, and failing tragicomically). It’s miserable, yet full of life and joy; it’s a crossroads of cultures and has always been one, yet many of its residents have some strange ideas about racial purity, musty-smelling Greekness and traditions from 150 generations back; it’s most famous about what it once used to be, yet a shockingly low number of the inheritors of this staggering legacy are truly knowledgeable in it — the contempt that comes with familiarity, I suppose. The weather is almost too good, yet its soul wakes up after dark.

What I love about Athens is the tender smell of orange blossoms in spring. It’s the terrace parties with breath-taking views. It’s the drinks in orange-lit sidestreets. It’s the grungy, punky feeling of every single wall being covered in graffiti I so love to hate. It’s the horta, the fava, the bakeries and pies, the pomegranates, the lemons in people’s yards. It’s the history that’s so intensely omnipresent one has to inevitably forget about it—until one discovers it again, which will be like they’re finally conscious of their own breathing.

If I had to encompass Athens in a single image and feeling, that would be the thousands of stray cats living in its streets: accidental ‘beneficiaries’ of urbanism, half-wild, half-dependent on the kindness of neighbours and strangers, half-surviving more than living, many of them sick and maimed. However, they are symbols of fighting for life despite all odds, leading lives of quiet struggle, loud yawling, affection, sunshine and laziness in equal parts. Perhaps that is the spirit of Athens.

All articles by Dimitris Hall

MOMO – Get back your stolen time

Blame the Sun – The new taproom on the block

The Falirou 5 Hotel – The effects of overtourism

To Potami – Café for work and leisure

Rezin – An Exarcheia staple from the ’80s

Pavlakis – The meaning of perfection in a cone

Babouras – Feel the buzz of Petralona

Eugenides Digital Planetarium – Across the universe

Playce – I want to play a game