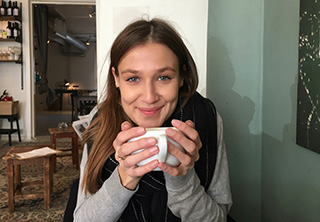 About me
‘Home is where the dome is’ – read a postcard I had on my wall while I lived all over Europe. After living in Cologne in 2005 and 2006, my studies allowed me to move to Münster, Aarhus, Amsterdam and Hamburg. It took me until 2013 to finally come ‘home’. I currently work as a media relations officer in Düsseldorf (don’t tell anyone!), but am happy to return to Cologne every night after work.

While I love to travel and explore new countries, cities and cultures, I get really excited about discovering new places in my city.

Why Cologne?
It’s a stereotype, but one that is actually true: Cologne is open-minded like probably no other German city. While it is not known for its spectacular architecture – most of the buildings in the city are rather ugly – it has a big big heart. So once you get to know the people, you’ll fall in love with the place.

I would absolutely recommend Cologne for single travelers, because it is so easy to make new friends, even if they last only for the night.

All articles by Rabea Ottenhues

Le Kiosk – Get ready for a summer’s night

Reissdorf-Männchen – He drinks, she drinks