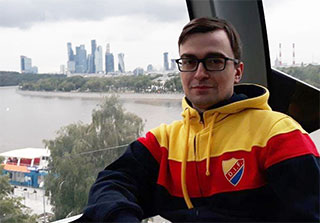 About me
I’m a student of Moscow State Institute of International Relations, where I study economics, and I also work for the Analytical Center under the Government of Russia (my job is connected with innovations).

I’m a fan of Lokomotiv Moscow, the best football club in the world if I’m not mistaken. I like traveling, which means visiting both foreign countries and small towns in the Moscow region.

I like hamburgers, especially when they contain some real meat. I hate seafood, it smells.

Why Moscow?
My father is a diplomat, so I have traveled a lot. I lived in Egypt and Turkey for 4 years, so unlike the majority of Russians I associate the beginning of my childhood with the seas and sunbathing.

I also spent 3 years in Norway and found it boring (today I regret that about it). Finally, I finished school in the United States – a country I could live in with the same comfort as I do in Russia.

That’s why I’ve spent less time than I’d like in Moscow. Now I use every opportunity to explore a new spot in my favorite city. Sometimes I search for amateur or unpopular sport events and attend them to find out more about the district they are held in. Sometimes I just walk without using any devices and find a place I’ve never visited before. By the way, Moscow looks huge, but if you have just one day you can reach its South from the North on foot.

So, I’ve visited many places in Europe and the US, but I’ve never been to a city similar to Moscow. Amazing architecture, friendly locals, crowded stadiums. So perfect. On the other hand Moscow is crowded, noisy, dirty, with tasteless monuments and selfish people. So perfect for me.

All articles by Ilya Sokolov

Troparevsky park – Hulk among the parks

Memorial flat of Dostoevsky – How he lived

The Rink in Gorky Park – The largest in Europe

Experimentanium – You won’t be bored

Baravi-T – A taste of France