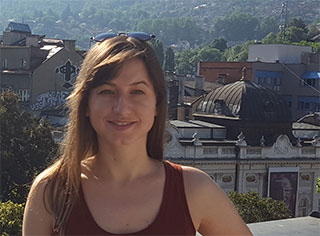 About me
I’m an office manager and a regular 90s kid whose greatest passions are good music and cinematography, anime and sports.

In everyday life, I continuously look for challenges and adventures and even though I’m more of an introverted type of person, I really enjoy meeting different kinds of people with whom I share the same passions. Nothing better than that overwhelming feeling you get when talking with someone who completely understands your excitement over something.

I wanted to become a Spotter because I would like to give others a chance to perceive Sarajevo from my point of view and maybe help them feel this city’s soul in the best possible way.

Why Sarajevo?
Even though this is a rather small city, Sarajevo has a lot to offer to a stranger:

– Diverse architecture where you can see the impact made by the many occupiers of this city through the centuries.
– The rich and unique cuisine derived from different cultural influences over the centuries. I dare you to try to turn down a coffee or food when offered by someone whose home you visited. 😀 People here just don’t believe in a kind of hospitality that doesn’t include eating or drinking, regardless of your needs for food and drink at that moment.
– Public transport that often makes you an inevitable participant in a conversation with a complete stranger (mostly older people) who just find it rude that people nowadays don’t talk to each other but rather look at their phones.
– Hours of coffee or night out time with loud and sometimes presumptuous but very humorous and welcoming people.
– Slow living. Maybe you’ll notice it at first, maybe you won’t but it’s definitely there, and it’s in Sarajevo’s DNA.

All articles by Aida Omanović

Klopa – Bite worth every penny!

Caffe 105 – Searching for peace of mind?

Freaky’s Pub – For local ‘freaks’ only!

Birtija – A bar to come back to

Celtic Pub – Do you also live in pubs?