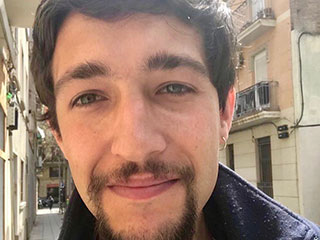 About me
I was born in Barcelona in 1991, just one year before my city celebrated the arrival of the memorable Olympic Games.

Last year, I graduated from the Universitat de Barcelona (UB), with an English Literature and Linguistics degree, during which I spent half a year doing an Erasmus exchange in Warsaw, Poland, which is where I began learning Polish. I’m currently trying to learn Dutch.

I am a gracienc and an escapulat (meaning I am from Gràcia and a supporter of CE Europa football club), although I also go and watch Barça now and again.

Travelling is one of my biggest passions, and, as much as I love my city, I love exploring other European cities and discovering new spots and places. In the past couple of years I’ve visited 25 cities, including Amsterdam, Brussels, Köln, London, Lyon, Manchester, Paris, Prague, Rotterdam and Vienna.

I am also very passionate about music, especially live music. I’m open to all kinds of music (indie rock, electronic, jazz, psychedelic rock) and I am a huge fan of brit-rock band Wolf Alice.

Why Barcelona
Some of the reasons I love Barcelona include: the marvellous architecture, its vivid ambience, the warm people, the nice weather, the respect for cultural traditions and, especially, the act of discovering something new every time I get lost wandering through the city’s charming streets.

I really enjoy showing visiting friends and family around the Ciutat Comtal.

Sala Apolo – Life on Mars? There is in Apolo

Razzmatazz – Do you remember the 1st time at Razz?