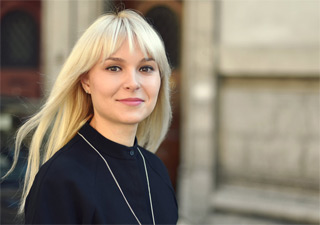 About me
I have been living in Bucharest my whole life except for a couple of years where I lived in Amsterdam. I’ve been back in Bucharest since December 2012.

I am a marketing person and I also own Zestre, a t-shirt brand with handmade traditional Romanian stitches applied on them.

I am a food enthusiast, I am into finding and trying out new places, I love traveling, coffee, interior design and wandering a city’s streets, discovering architecture and not just that.

Why Bucharest?
I love Bucharest because it’s a vibrant city, I would dare to say even chaotic because of its mixture of East and West: there’s a huge influence from the Ottoman rule, there’s the “Little Paris” feeling of the city and you can also sense a communist flavor in it. All in all it’s an ordered chaos.

It is great to be part of a city that is constantly changing, there’s always something new happening, from new areas to go out in, to new bars, clubs and lots of events. A lot of old buildings are either restored or reused for different purposes. It’s really hard to get bored in Bucharest :).

All articles by Diana Goanta

La Metoc – One of the oldest gardens in Bucharest

Stadio – Italian joint with a twist

Haveli – My little India in Bucharest

Grand Cafe van Gogh – A piece of Holland in Romania

Calif – The Orient on a pita bread