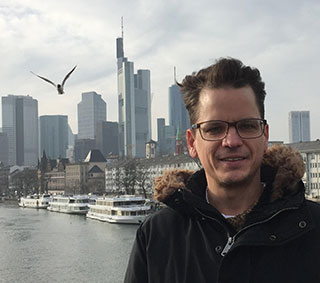 About me
I grew up in a very idyllic small town in the north of Hesse (middle-west Germany). At 18 I moved to Wiesbaden (the capital of Hesse in the south) and since 2007 I’ve been living and working in Frankfurt.

I am a digital marketing manager for a French company and I’m happy to be back as a Spotter after my 1-year sabbatical in the US.

Why Frankfurt?
Because it’s a highly underestimated city. It has the reputation that you won’t find anything else apart from banks, people in suits and overpriced restaurants & flats. But Frankfurt is more. Out of 197 nationalities on Earth, 177 have found a home in Frankfurt; at every corner you hear people speaking English, Spanish, Chinese as well as our soft and charming local dialect “hessisch”. We have one of the biggest airports in Europe, international & English theaters and the European Central Bank is located in the eastern part of the city. As you can see it’s a very international city and that makes it (at least in Germany) kind of unique — if you consider the population of only 700.000. It’s “the smallest metropolis in the world”, as we locals proudly call our hometown.

All articles by Christian Paulus

Picknick Cafe – The new talk of the town

Cafe Metropol – Dinner or a coffee after art

Süden – The south in Frankfurt

Maincafe – Picnic by the Main river