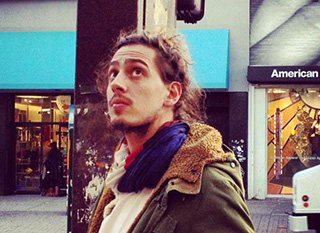 About me
I have been studying Chinese and Indian languages and cultures at the “Sapienza” university of Rome since 2012, which is also when I moved to Rome. I was born in the south of Italy, but grew up mostly in Austria, since I have one parent each from both parts.

I love travelling, getting to know new people and cultures, grabbing a few beers in the evening, preferably whilst listening to live music! But I guess my biggest passion is languages, and I’m trying to learn as many of them as I possibly can before my brain reaches full capacity.

Why Rome?
Well I could just throw out all the standard-phrases like “because it’s one of the most historic cities in the world”, “because Rome is sooo beautiful” and so forth, at you, but I would be lying. Although I do love Rome on an aesthetic level, I don’t think that’s what makes a city. I love Rome for what makes it different, and it is indeed VERY different compared to other European capitals…

I love Rome for its chaos, I love it for the food, I love it for its lack of efficiency in every aspect because it just represents the mentality. I adore its parks, I love how the eyes of the Romans light up in complete admiration when they talk about their city, and I also love how, one second later, they can start complaining about it in the most devastating ways.

I love that I don’t know when the bus is coming, and I love that I can drink a beer with my friends while sitting on almost 2000 year-old Roman walls. I love how it’s caught up somewhere between the ancient and the modern, the decay and the breathtaking beauty, ignorance and genius…

All articles by Matteo Mueller-Thies

Trenta Formiche – Ants in your pants

Rive Gauche – Right to your left

Piazza Testaccio – As Roman as Rome gets

Lettere Caffè – Does that come with poetry?

Piazza Trilussa – Beyond the Tiber

La Giardinetti – The journey is the reward

Himalaya’s Kashmir – India at its finest